On this episode of “The Wolf Among Us,” there is a tragic crime in Fabletown, and Sheriff Bigby Wolf is hunting the person of interest.

Note: This is a SPOILER FREE review BUT contains SPOILERS from the previous episode.

“The Wolf Among Us Episode Two: Smoke and Mirrors” starts Bigby Wolf in shock, staring at a photo from the big reveal of Snow White’s decapitated head from the end of “Episode 1: Faith.” The anguish on Bigby’s face is palatable and heartfelt, as is his frustration during the interrogation. The dark tone of the story and interesting use of fairy tale characters are my favorite parts of this comic/game series. It is dark, it is sad, it is dirty and it is perfect because of it. What follows is the journey through several different locations of Fabletown to uncover the truth of the serial killer that lives amongst the citizens there.

The characters Bigby meet throughout his investigations are unique and diverse, each with their own intriguing twist from their original source material.  Telltale does a phenomenal job of taking a character from its original situation, i.e. “Beauty and The Beast,” “Snow White,” “Ichabod Crane” and others from “Faith.” You’ll find even more great character twists in “Smoke and Mirrors.”

Hey… you’ve got some blood… .nevermind.

Telltale’s games stick to a tradition of using dialogue choices to push the narrative forward. As you play through the game, four dialogue choices will appear on your screen, and you have a limited period of time to make a decision to react, or say nothing. During high intensity situations, such as fight scenes or interrogations, the count down is much faster, forcing you to make a split decision choice on how best to respond.

Choices made, whether passive, static, aggressive or physical, directly impact the way the story unfolds for you. Some choices might coax a character to give you information faster by using the L2 or R2 triggers to punch, X or Triangle to dodge or kick and the analog stick to evade. However, those choices might make you look better or worse in the eyes of your allies.

While playing the game, you use your analog sticks to move around each scene while moving your cursor (unless you remove that feature from the settings menu) over highlighted items to investigate them. While the majority of things you can click on have a specific effect on the game, others are simply there to help round out the story. Different touches like reading the tenant housing list in “Faith” or pressing your ear to each door of the hotel to hear what the occupants are doing inside, help to fill out the environment and in turn making it feel more alive. 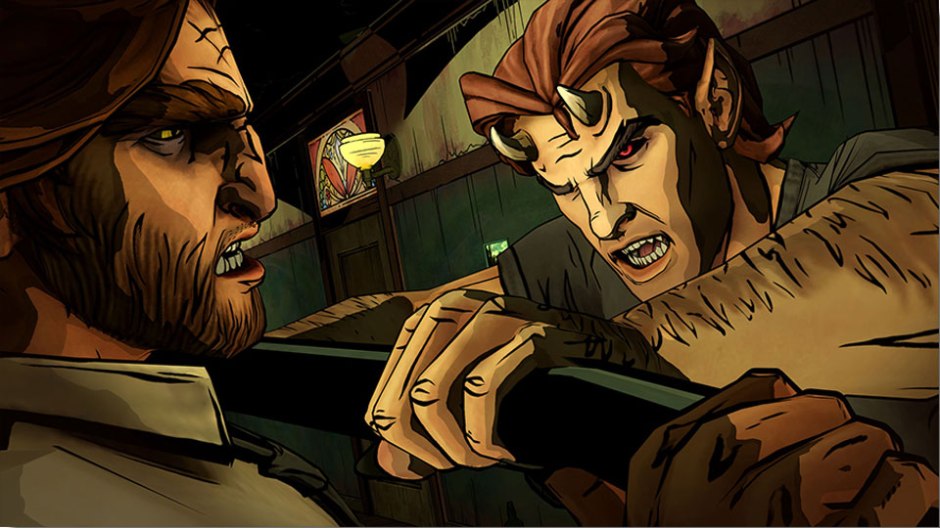 The comic book styling of “The Wolf Among Us” works great. The artistic elements slide fluidly from comic to video game, and I am glad to see they didn’t try to re-imagine the medium. There are a few frame rate issues during transitional moments from cutscene to actual gameplay, however, pausing and unpausing seems to clear that right up.

Right off the bat, you’ll notice the consistency in the art style. Background and lead characters are all painted with the same color palette, so the backing effects don’t have a darkened appearance to them simply because they are static. Each area that Bigby interacts with looks as great and detailed as everything making up the background. It’s nice to see a book on the table, approach it for a better look and be able to flip through the pages of it. Items such as the book hold great detail and content that pushes the story forward. 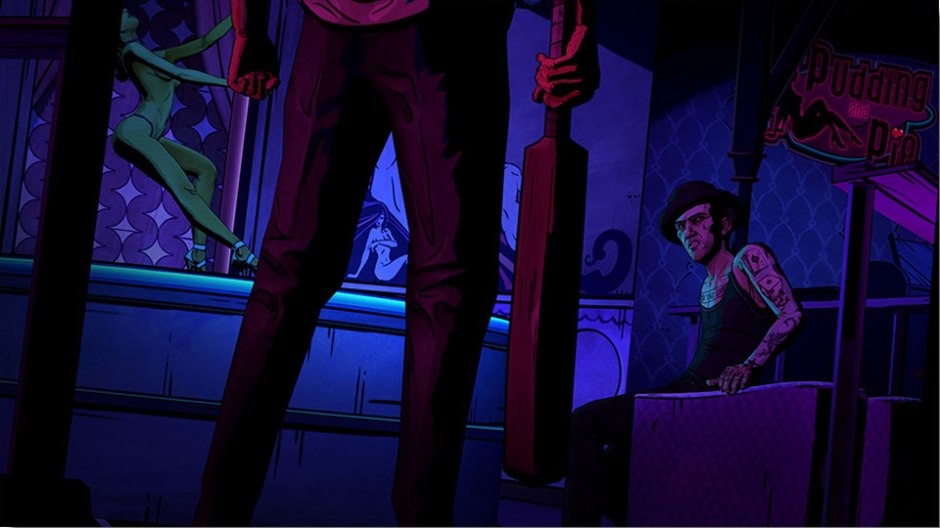 There’s this new joke going around…

The voice acting is all top shelf. Adam Harrington’s portrayal of Bigby Wolf really shines in this series. He does double duty as the woodsman, but it’s his time as Bigby that makes it the most endearing. Melissa Hutchison (Clementine of Telltale’s “The Walking Dead”) sounds very different between TJ and Beauty. The rest of the cast does an outstanding job as well in each of their characters.

The musical score in “Smoke & Mirrors” is well placed. Subtle background noise fills the dead space when Bigby rides in a cab and is brought about more fully during high impact situations with an intense score. Music is one of those subtle things you forget until it isn’t there, and I’m glad to say “TWAU” does a great job with it.

“The Wolf Among Us” is a franchise you should be daring to jump into. The characters are engaging, the story is interesting and the gameplay is fun enough to keep you entertained. All telltale signs of a true Telltale game. You owe it to yourself to get involved with the series.