The Red Viper of Dorne takes on The Mountain, while Sansa takes charge of her situation and Daenerys gets some startling news.

Note: The following review goes into detail about the episode. SPOILER ALERT! (For the show, NOT the books)

I don’t think there’s any other show on television right now that does such a good job of building up your hopes so high, only to have it all come crashing down a minute later, leaving you emotionally shattered. I’ve read the books so I knew the outcome of Oberyn’s tussle with The Mountain well in advance, but watching it all play out still had my heart pounding.

Oberyn has been a great addition to the cast this season, with his short stint certainly proving to be a memorable one. You wouldn’t have thought that his and Tyrion‘s lives were on the line as he sipped wine and joked around with his paramour about the size of the task he faced. It was great seeing how well he could back his words up though as soon as he got in the ring. We hadn’t heard too much about his fighting prowess in the lead up to the fight, so seeing how skilled a warrior he was was pretty cool. As a matter of fact he basically did win the fight, he just made the mistake of going too far with his interrogation and not finishing off the Mountain. Damn though, we’ve had some really gruesome deaths on this show, but watching Oberyn’s head literally burst open like a balloon was up there with the nastiest of them.

This all leaves Tyrion in a particularly awkward situation as he is now sentenced to death for the murder of Joffrey. It may be easy to think that he’ll somehow get out of this bind but how many people thought the same thing about Oberyn? We’ll probably have to wait until the season finale to find out for sure as the next episode may be very Nights Watch-centric. Tyrion’s scene with Jaime this week was fantastic however, as they had a little brotherly pow-wow before the fight. It was great to see them just sitting around, just acting like brothers one minute before the conversation shifted into the darker territory of Tyrion’s possibly impending death.

Up north with the Nights Watch, Sam realized how much of a massive idiot he is when the village he left Gilly in gets raided by Ygritte’s band of wildlings. Of course we know that Ygritte spared Gilly, but it still doesn’t take away from the fact that Sam was incredibly stupid to leave her there in the first place. What this all means of course is the wildlings have nearly made it to Castle Black, and Mance’s army is swiftly approaching from the other side. As mentioned here, it’s going to come down to 102 Nights Watch brothers vs 100,000 wildlings. No problem! With episode nine traditionally being the big standout episode of the season on this show, the battle for The Wall could be the best yet.

Sansa had a stand-out week as she hopped right into the game of thrones by bending the truth about Lysa’s death to save Littlefinger. The ease with which she lied for him was impressive, something she obviously picked up during her time in Kings Landing. Thanks to Sansa, Littlefinger now has the trust of the lords of the Vale along with some considerable power. Next on his “to do list“ is getting Lord Robin to go visit some of his people of The Vale which may take a lot out of the sick boy, something which Littlefinger is likely fully aware of. That last shot of Sansa walking down looking oh so like her mother was kind of incredibly creepy, as Littlefinger stared on. It’s hard to tell whether she’s just playing along with the whole thing because she has to, or whether she has just fully embraced it. Time will tell.

Arya’s brief, single scene with The Hound this week was a great one, as they arrived at The Vale only to be told that her aunt had died three days ago. As The Hound looked on in stunned silence, Arya broke out into maniacal laughter. It’s funny actually, I can’t remember Arya laughing before so it just really jumped out at you. I suppose with all she’s gone through over the years that she just had to laugh when her last chance of safety disappeared out from under her. She unfortunately doesn’t know that Sansa is so close to her, so she and The Hound will be heading back out into the wild again.

Over in Meereen, Daenerys and Jorah’s relationship utterly imploded after word reached Selmy that Jorah had spied on Dany for Robert Baratheon. Jorah made the classic character mistake of not telling Dany himself way back in Season 1 after he had fallen in love with her, and alas he finds himself banished. Dany was absolutely furious here, and it wouldn’t have been too surprising to see her actually order Jorah’s death. Now though he’s been banished from Meereen and most importantly her side. So what does Jorah do now that he doesn’t have his Khaleesi to protect? I have a feeling we might not be seeing him again until next season, unless he gets a single, quick scene thrown into the finale. 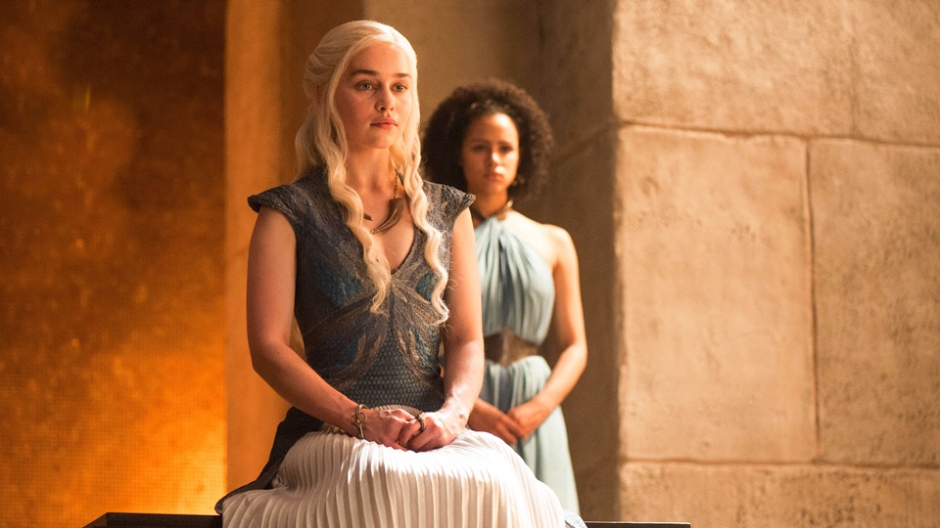 A few other things happened this week, including Ramsey being an evil little boy again and then being rewarded with officially becoming Ramsay Bolton instead of Ramsay Snow. This week was all about that fight though, and setting up the mayhem that will surely ensue once the Wildlings reach The Wall. All of that is to come over the next two weeks, for now we should pour a glass of wine out for The Red Viper of Dorne and pray that none of our other favorite characters have a run in with The Mountain.

Did the fight go as expected? Are you scared for the Nights Watch? Share your reactions and concerns in the comments below. (PLEASE, NO BOOK SPOILERS!)

1 Comment on Game of Thrones: “The Mountain and the Viper” Review