While Juice becomes desperate in his bid to escape the clutches of the club, Jax puts the next stage of his plan in motion.

Sometimes it’s quite easy to forget that the “heroes” on Sons of Anarchy are a band of cold-blooded murderers. One of the things that the show has always done well over the years is giving SAMCRO an opponent that is more despicable than they are. SAMCRO this season has definitely managed to pull ahead of everyone left standing, with the body count rising significantly again this week. I’m an absolute sucker for morally diverse characters, and I’m hoping the club’s darker path leads to a suitably dark finale.

Carrying on from last week’s Juice vs. Gemma cliffhanger, we found Gemma completely unharmed, much to the chagrin of a huge percentage of the people watching at home. I really would have liked to see the aftermath of that scene instead of jumping ahead in time to the next day, but the outcome was still effective. Juice was desperate for a way out and Gemma got to have another “conversation” with Tara. I’m not totally sold on Juice being desperate enough to go to Alvarez for help, but at least it gives him a way back into the main storyline. We were left on a cliffhanger involving Juice again, but with Alvarez handing him over to Jax, we can be sure it’ll lead to some great material next week. Time will surely run out for Juice in the next episode or two, but I hope not before he spills the beans about Gemma. 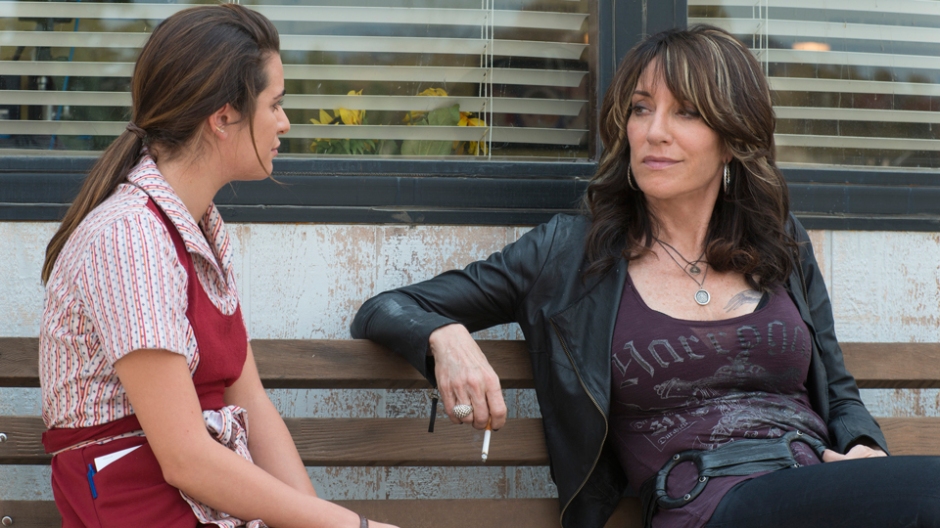 Jax once again managed to turn around a near hopeless situation, but as I’ve said before, it can’t keep working out like that. The Chinese problem is well on the way to being sorted, and now a deal has been brokered to set up a drug pipeline for the Mayans and the Aryan Brotherhood. August Marks is next on Jax’s to-do list, but something tells me he won’t be an easy problem to solve. That van full of dead bodies that SAMCRO left on one of Marks’ development sites is practically a declaration of war. Jax has been taking steps to make alliances to bolster the club’s support, and there is even talk of “patching over” the Grim Bastards. That would be a significant move as the rules against black members joining have been dealt with in the past. Seeing such an archaic rule removed would be a breath of fresh air, but I fear adding numbers to the club at this stage is just going to up the body count of the final episodes.

Gemma breaking down upon finding out Juice had been captured was a very effective moment.  You could see the realization hit her that her house of lies was about to come crashing down around her. I don’t know how much longer they can leave it before Jax finds out the whole truth, but now that Nero knows she has been lying, I can see it stretching on a little longer. I could see Juice possibly being executed, taking all of his knowledge of Tara’s death to his grave, only for Nero and possibly Unser to piece everything together themselves. Gemma’s conversations with Tara are still coming across as a little crazy to me, and each passing moment leads me to believe she may be completely cracking under all of that guilt.

We’ve had plenty of action already this season, so it was inevitable that things would slow down a bit at some stage. After dealing with the immediate threat from the Chinese last week, “Smoke ‘Em if You Got ‘Em” felt like the show was stalling for time while it set up the next stage of the story. The body count was once again quite high, but no one of great significance was taken out. With Juice in Jax’s hands and the confrontation with August Marks looming, I expect things to turn to hell again next week.

Will next week spell the end for Juice, or will he somehow find his way out of an almost impossible situation? Shootout in the comments below.