Driveclub takes you away from the usual “drive wherever you want, however you want” model, in place of something more authentic and challenging.

Driveclub does very little to introduce itself to you, or explain what your purpose is.  Upon starting the game, a graphic is displayed showing button functionality, and that’s about all you get. Driveclub is a game that expects you to know how to drive a car. Each race progresses you toward better and faster cars, however, there is never a good reason for why you’re there or how you got involved in the first place. Is backstory important in a racing game? It could be argued either direction, but it’s hard to overlook the big hole that’s left when no one is introduced; you go from load screen to steering wheel without so much as a picking a driver’s name.

Grow up and drive.

I’ve become so used to games like Need for Speed that I constantly tried to hit racers off the track or I addimately looked for shortcuts through yards and alleys. Driveclub is not that kind of game. A three second timer appears on the screen if you vary off course even a little bit, a penalty is incurred if you cut the corner of a track or if you hit another racer. Even slightly tapping the fence or guard rail docks you points. It’s frustrating for people looking to trail blaze. It forces you to take your time, break when necessary, and play the game the way it was meant to be played. The driving itself is very tight and unforgiving. Drifting is accurate and near impossible in the beginning with the basic model cars. This can be frustrating to get used to even with the better cars you unlock. 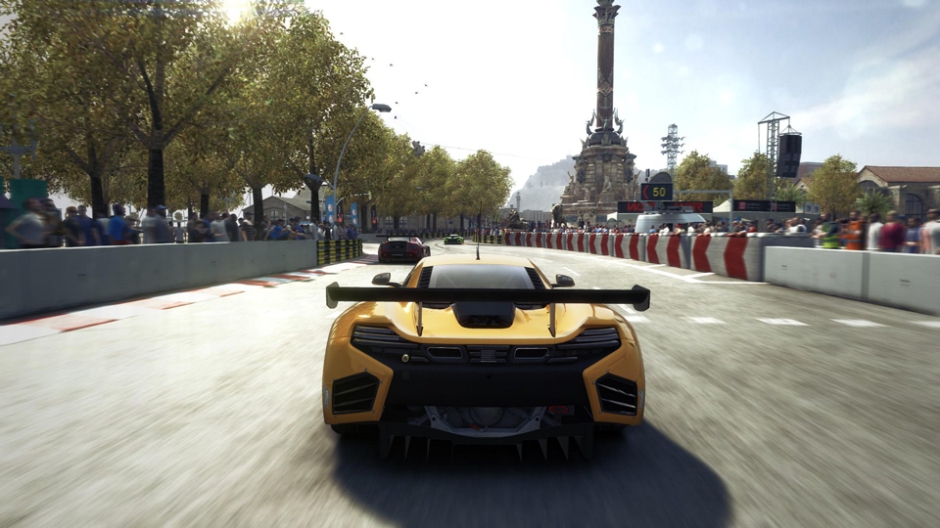 Each race has challenges available to help you gain experience points to get better cars quickly. These can range from finishing in the top three, to following a specific line with perfect precision. While these are fun for a while and pushes you to do your best, it’s hard not to feel trapped the entire time you’re playing the game. Character customization isn’t an option, but there is a fair bit of room to mix vehicle designs and play with the color scheme of your vehicle. The car selection, while vast (50 to earn, one for purchase), is largely emphasized on European manufactured vehicles. Only one American car, The Venom GT, is an option. Japanese manufactured cars are currently non-existent. While these may be released through future DLC, it, when added to the lack of plot and restraint behind the wheel, makes Driveclub that much more lackluster.

For a game called Driveclub, it shines the brightest when you’re racing against other people online. Unfortunately during my time with the game, there were so many issues with connectivity that my online play sessions were all but missing.

Dat attention to detail tho

Driveclub is a beautiful game to watch; the backdrops are varied and great looking. If you switch your perspective to cockpit, the interior of each vehicle is unique and responsive on a hands/wheel to thumbs/analog stick ratio. The game goes for accuracy as much as possible, with the evening sun shimmering off of the water, blinding you for mile on your way to your location. Driveclub is a game that makes it easy to crash when you’re too busy trying to sight see, and even damage looks good. Gone is the “one dent fits all” damage philosophy racing games have been plagued with for years. Damage changes according to the severity of the impact.

Music is important to every game, and the understated electronic score that Driveclub uses refers back to its attempt to make you feel like you’re playing a serious racer. We are a long way from Lil Jon and The Eastside Boyz screaming, “To the windoooooow, to the walls!”  The menu screen has a good feel to it that makes you want discover what it has to offer. Even as I’m writing this review with my headphones on, I’ve got the menu screen serving as my audio entertainment.

Driveclub does a lot to bring the reckless and casual racer to a more sophisticated platform, using penalties and reload timers to discourage bumper cars and rally racing. The music and visuals are all top shelf, really doing their job to help you get lost in the city streets and the back roads of the world you’re racing through. The lack of narrative and character customization is a total missed opportunity, as are the availability of cars outside the European variety. At its core, Driveclub is a game built for people that want to feel like a professional driver, not just a kid with a turbocharged engine.

Do you like the focus on good driving or do you miss running people off the road? Drive your thoughts to the comment section below.