With Brick now in complete control of the Glades, Team Arrow gets an offer of help from an unexpected source.

I’m going to get my major complaint about “Uprising” out of the way first and here, as I actually enjoyed pretty much everything else. As the tagline above hints at, I felt the whole thing was just way too much like The Dark Knight Rises. Arrow has always had a few connections to Christopher Nolan’s Dark Knight trilogy thematically, but they went a little bit too far here. A bald, physically imposing villain takes over the city, utilizing a group of men freed from prison; the main hero has fallen and is presumed dead, and his associates fight on in his absence; the remaining heroes raise an army to fight against the villains, with the hero finally returning to inspire everyone. I could be describing the latest three episodes of Arrow or The Dark Knight Rises, take your pick. Don’t get me wrong here, I still enjoyed the episode. I just found that the similarities were quite distracting, and the show is much stronger when it’s blazing its own trail.

With all of that out of the way, I can talk about what I actually liked about the episode. The whole uprising bit at the end featured some pretty good action. Laurel is getting more self-assured with each episode, and she’s starting to kick a bit more ass without becoming too strong, too fast. Ted Grant joined the fight in a slightly goofy looking costume, but he got to go toe-to-toe with Brick in a big way. Actor J.R. Ramirez has an ongoing role on the show Power, so I have a feeling this might be his last appearance on Arrow for a little while. After pummelling Brick at the start of their fight, the tables turned and he took quite the beating. This would allow them to bench Ted Grant in the story for a while, and also possibly open it up for Oliver to take Laurel under his wing.

Malcolm Merlyn was at the center of everything this week, whether we were seeing flashbacks to the time of his wife’s murder or watching him create friction among Team Arrow. Having Brick turn out to be the one who killed Merlyn’s wife was a good twist that gave Merlyn a good reason to join the fight. I’m not quite sold on the redemptive path that the writers seem to be sending Merlyn down. Felicity definitely had a point when she pointed out all of the horrible things Merlyn had done recently. They don’t call him the Magician for nothing though, and this could all be another dastardly plot by Merlyn. One thing’s for certain though, Team Arrow joining forces with him to take on the League of Assassins holds a ton of potential, and the Atom will also be thrown into the mix at some stage.

“Uprising” will go down as the weakest episode of the “Brick trilogy,” but it was still a very entertaining episode. The Dark Knight Rises comparisons aside, we got some really cool action scenes and a great setup for future episodes. Vinnie Jones’ time as Brick has been wonderful, and I’m hopeful that we’ll see him break out of prison in the future. The ease at which Oliver has recovered is a little disconcerting, but I’m still crossing my fingers that there’s a more supernatural explanation for all of that. Oliver choosing to work with Merlyn is a huge moment for the show, and it seems to have driven Felicity and Oliver even further apart. With Oliver back and Brick out of the way, it looks like we’re about to start hurtling towards an epic confrontation with Ra’s Al Ghul.

Was “Uprising” a little too similar to “The Dark Knight Rises,” or did you think it stood well on its own? Tweet your thoughts @OldSnake24 or leave them in the comments below. Also, be sure to follow us @YouNerded. 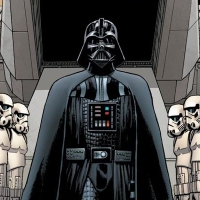