Forrest MacNeil returns to a life of violence, threats and anonymous pleasure.

Review was a comedy I discovered after its inaugural season ended. After its finale in May of last year, things went quiet. Alas, one of my favorite comedies has resurfaced and brings with it the same black comedy and a clueless lead character.

After Forrest ruined his marriage, got his father-in-law killed in space and a whole host of other calamities, Forrest returns to host the show that proved to be a detriment on his life. As a precaution for some ridiculously outrageous request, i.e. a divorce, there is now a veto booth allowing Forrest to veto two requests at some point in this season. Something tells me those will backfire. Starting the season strong was a request to get into a bare-knuckle brawl. Andrew Daly’s Forrest is one of the funniest characters I’ve seen on TV. He has the ability to do and say hannus and downright immoral things, but does it in a manner of someone who isn’t aware of how idiotic they seem—all with the charisma of a game show host. So when he’s walking around looking for someone to sock in the face, it is just a delight. When he finally finds someone to satisfy his need for a round of fisticuffs, he lands a powerful blow on a man who casually cut in line at an ATM. This led to the man taking out a pistol, aiming it at Forrest and firing three shots into Forrest’s torso—hilarious stuff, right? The producers have always been a background presence, not there to encourage Forrest, but to make sure they have a show to air. This led to the fitting question of “Are you getting this” from Producer Grant as Forrest bleeds out.

Following the shooting, Forrest is aided in his recovery by his nurse Marissa, played by guest star Allison Tolman (FX’s Fargo). This would prove to be very romantic until Forrest gets his next request, which is to blackmail someone. After hilariously attempting to blackmail those around him, he settles on his loving girlfriend. As a nurse, she had been swiping pills of dead patients and giving them to Forrest to help him recover. On a dinner date, he decided to kickstart the process of blackmailing her by taking out bottles of stolen pills and presenting them to Marissa. Still keeping his dumbfounded attitude intact, he demands that she pay him $500 a week for six months or else. Review (the show within the show, not the show) has always put a strain on Forrest’s relationship with women, and this time is no different. 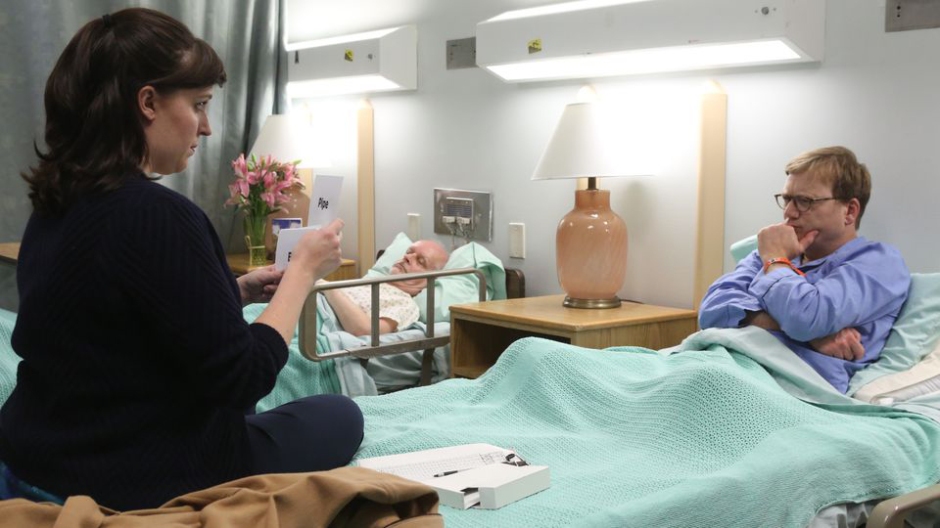 After Marissa pays Forrest $1,000 after assuming he simply has money troubles, everything went back to normal…for two weeks. When Marissa’s deadline approaches, the rain that is blackmail comes pouring down. After a refusal to pay him, what other choice did Forrest have but to tell Marissa’s boss about her drugs? Emphasizing how great of a nurse she is, hoping that would play in her favor, Forrest delivers the drugs to Marissa’s boss, prompting Marissa to get fired. Heartbroken, she confronts Forrest leading to him pleading in his defense, “Why did you force my hand like that?” Fed up with the maniacal villain’s shenanigans, she pulls a gun on him. Forrest instinctually decks her in the face, learning from his last review and Marissa’s guns pops off. Luckily (maybe) no one was shot, but unfortunately Marissa was arrested.

Capping off the requests from this show’s heartless fanbase was a request via tweet that simply read, “Glory hole, motherf**ker!” Forrest’s quest for glory was an unsanitary one. But when our lead host finally inserts himself into the right situation, the glorification is enacted. Oblivious to the fact the a man was on the other side of the wall, he returns night after night. But when the getting is just too good, he seeks this mystery “woman” out. Spotting a well-together woman in the same park, who turns out to have a PhD, Forrest decides this must be the woman pleasuring multiple men at night in the bathroom of a park through a gloryhole. The woman rightfully flees, while the actual pleasure-man—a park maintenance worker—is standing by tending to the park.

Review returned from his year-plus long hiatus with a treat I’ve been craving for a while now. Forrest performs his loveable, oblivious, almost villain-esque actions, and the black comedy that sprouts from them is what makes the show. After some brawling, blackmailing and glory-ing, I’m giving this episode of Review four and a half stars. (Well, 88, as we don’t rate on a star-based system here.)

Are you eager to seek out a gloryhole? (Don’t answer that.) Tweet me @NerdDotMe. And be sure to follow us @YouNerded!