Forrest stoops to a whole new and offensive level in this week’s ‘Review.’

Review delivered an impeccable triage of reviews this week, making this one of the show’s best episodes to date. We got a bit more time from characters outside of Forrest this week. This benefited the overall narrative as Josh and his girlfriend Tina played a pivotal and surprisingly dastard role. Also, after seeing this episode, I would love to hear more lines from A.J. Gibbs instead of her reading reviews all willy nilly.

The first life experience for Forrest to review this week was the near life-changing act of being falsely accused, set upon by his own request, of course. Forrest acquired the help of Josh and Tina to search for petty crimes to accuse him of, leading him to the hard crime of stealing avocados. After some isolated scenes of Forrest doing mundane things like giving Josh and Tina a can of gas, exchanging his glasses and signing supposed fan mail, all was in place to frame Forrest as an arsonist who burned down a sorority house. The dark humor on this show continues to satisfy, greatly. When the cops arrived at Forrest’s dad’s home, Forrest was escorted happily until he realizes that he’s being charged with arson. I enjoyed Josh and Tina’s involvement in this review. The juxtaposition of their pure delight and false ignorance of Forrest’s innocence, alongside Forrest pleading for their help was an uncomfortable joy to take in. And to think, all of this was ignited by a serial birthday cake eater of a fan. All turned out well, though, as Josh and Tina knew who the real culprit was the whole time. Needless to say, being falsely accused all willy nilly is not a great life experience.

Coming from a teenage boy possessing the hots for his teacher, Forrest was asked to see what it was like to sleep with his own teacher. He immediately spun the request to play in his favor, eagerly pursuing the kid’s teacher, Mrs. Greenfield, via the social media web. With the goal of sleeping with this married teacher, Forrest exhibited some predatory behavior to achieve such a task. Tailing last episode’s desperation, I was actually surprised to see Forrest hold back the thirst and throw some A-level game at Mrs. Greenfield. The two ended up together in a multitude of sexual, world-opening positions. This review was a success, with Forrest successfully hitting his sex target. However, it didn’t end there, as the kid who requested the review catches Forrest and his teacher together, prompting a hilarious flipping of the bird at the camera. Forrest MacNeil is an oblivious, immature character, and his whole rant of how he got to make love to the kid’s teacher was a fitting capper to this review. 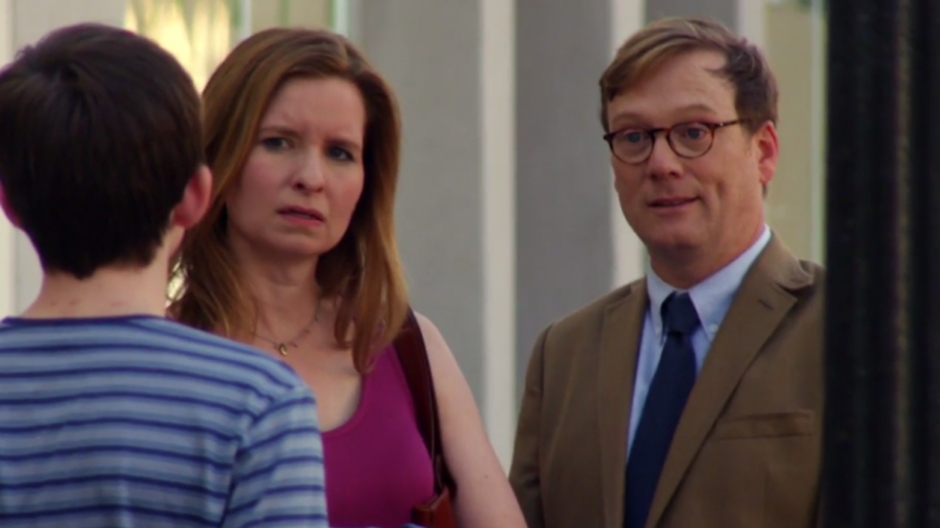 Coming from William Nilly of all people, Forrest is asked what is it like to be a little person. In Review fashion, Forrest surrounds himself with everyday things, driven up to ridiculous proportions. I very much enjoy the physical comedy of this show, and it fits well with the black humor provided in this review. Deeming the props unsatisfactory, Forrest felt the need to step his game up, or rather, step himself down. Using the not-so-subtle prop of knee shoes, Forrest began walking around on them through his everyday life. From crossing the street to enjoying some TV, Forrest was, above all else, committed to this new life as a little person. Hitting on the above point that Forrest is void of any awareness of his actions, he believed people were rude to him because he was a little person, and not at all that he was impersonating a handicap he didn’t possess. Wanting to surprise his father and Mrs. Greenfield with dinner, Forrest sent them away while he, a faux little person, cooked in a normal-sized kitchen. When a fire ignites, Forrest attempts to reach the fire extinguisher, but, hardwired to this role, could not break character and simply stand up. The look on his father’s face as he realized that his longtime home could have been saved if Forrest simply just stood up was pure gold. I literally had tears running down my face as Forrest, even in light of the fire, let it all burn for the sake of this show.

“Falsely Accused, Sleep With Your Teacher, Little Person” stands out as one of Review’s best episodes. If you have not watched the show or want to get someone into it, this should be the episode to show off. Everything tied together so well, with Forrest being falsely accused of arson in the first act to somewhat intentionally letting his father’s house burn down in the third. We got a bit more from A.J. Gibbs, and I do hope we hear more of her one-off lines throughout this season. In terms of Forrest’s new girlfriend in the form of Mrs. Greenfield, I was surprised to see her still around by episode’s end, given Forrest’s track record with woman coupled with his show. I guess relationships work out when you burn your father’s house down rather than intentionally divorcing your partner, blackmailing them or begging them to f**k you on a plane. And for that, this episode of Review gets four and a half stars.

Would you have sex with your teacher? (Don’t answer that.) Tweet me @NerdDotMe. And be sure to follow us @YouNerded!