‘The Leftovers’ takes on a new locale and a new family.

TAKE ME TO CHURCH.

From the new opening folk theme that starts the premiere, things felt considerably different from The Leftovers’ drama-heavy first season. The opening scene of “Axis Mundi” was quite the departure from what I was expecting. This, I loved. We are introduced to an indigenous woman awaking in and emerging from a cave filled with other sleeping people. The nameless woman soon after experiences an earthquake that kills the others in the cave, and soon after, childbirth. The rest of this short film-esque opening is rather hard to put into words. While it is seemingly void of connection to the main story initially, I’m sure there were tons of seeds planted that will no doubt blossom throughout this season. We already have a bridge from past to present in the form of the river.

Although quite the surprise, that opener was wiped clean from my mind with the introduction of the Murphys. Kevin Carroll plays John, the father of the bunch, and playing the mother, Erika, is Emmy winner Regina King. Evie (Jasmin Savoy Brown) and Michael (Jovan Adepo) round out the Murphy bunch as the daughter and son, respectively. The family lives in the new setting of Jarden (Miracle), Texas, a town that was spared from losing a single person to the departure that claimed two percent of the world’s population. It’s a fascinating premise to kick off this new season with, and the new location kept this premiere feeling fresh in familiar territory. That familiarity, though, is not felt until nearly three-quarters of the way in. Once again, not a complaint. While the anticipation of the Garveys’ Season 2 debut lurked in my mind up until the actual moment, I was enamored with exploring the Murphys. 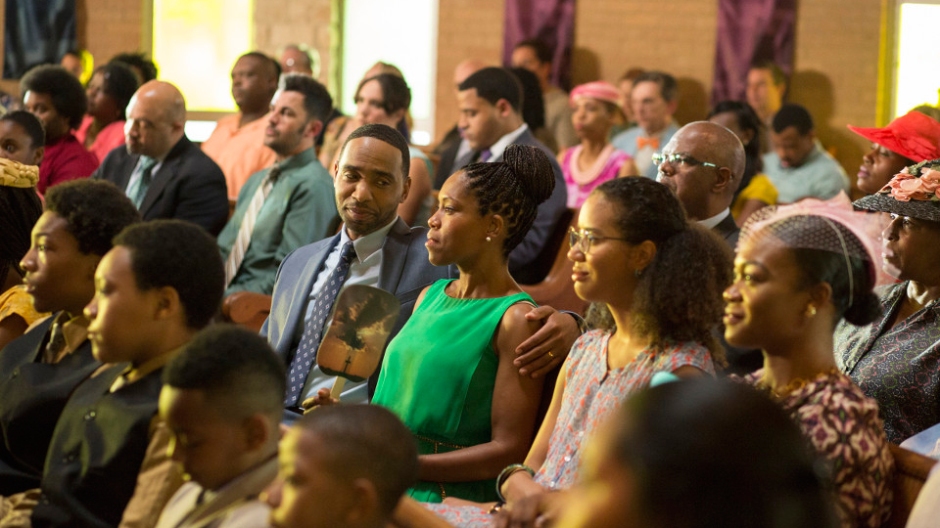 They are initially presented as an innocent, suburban family, with a hard-working father, a mother that cooks breakfast for the bunch, a son who’s devoted to God and a daughter that’s free spirited, though not rebellious. It doesn’t take long for John to show that he isn’t a noble man of the law. John’s body language, including a shining smile, may express honesty and politeness, but his words are traveling in the opposite direction. I actually found it unsettling when he smiled at whomever he was talking to. We see him visit a palm reader named Isaac, flashing that same smile, and later returns to burn the man’s house/business down. It seems as if anything hinting to any cult-like practices are being taken care of relentlessly. This seems to be an echo from the first season, i.e., Wayne’s hugging reservation. What’s surprising is that the assumed kind-hearted Erika is fine with John’s actions…well more numb, rather. She’s a deaf nurse that shows flashes of kindness but leaks darkness akin to her husband, albeit less extreme. Michael, the son, is different. He’s a devout Christian, doing what he can to improve the lives of other by way of faith. We see him feeding a homeless man and sending a letter for him. We also witness him making night runs to pray for people, specifically an unnamed man living in a shed. What makes Michael so much of a standout from his family is that he doesn’t show any signs of evil or heartlessness. Finally, Michael’s twin sister Evie makes a good impression. She’s social and not afraid to speak up. For a show that had a first season with minimal humor, Evie is an appreciated light to have on the show.

With about 15 minutes left in the premiere and after getting to know the Murphys rather well, the Garveys—namely Kevin, Nora, Jill and Wayne’s baby Lily—enter the picture. The reverend Matt Jamison and his wife were actually the first people from Season 1 to show up, which was a nice pathway to blending the old with the new. It’s at Johns birthday BBQ when the Mapleton family of yesteryear intertwines with the Jarden family of today. We’ve barely scratched the surface with the Murphys, but with the Garveys (Nora and baby Lily included), they haul a massive load of dread, death and hardship with them from Mapleton. With that, Kevin isn’t someone to f**k with, but from what we’ve learned, neither is John. This is looking to be an excellent and rather intimidating rivalry. At the BBQ, we see Evie immediately bonding with Jill, and we also see interest in Jill from Michael. It’s hinted early on that Evie takes meds for something, but it’s clarified that epilepsy can render her mindless if they aren’t taken. Evie ends up being the crux in the closing moments of the episode. When a violent earthquake occurs, Evie’s absence is discovered. And in the culmination of her search, it’s discovered that she, her friends and, more shockingly, the river from the bizarre opening of the episode are all gone.

“Axis Mundi,” in the vein of The Leftovers as a whole, is just superb TV. This damn near reboot of the series is very welcome in my book, as it was a ballsy return for a series that’s been on hiatus for over a year. I loved not immediately catching up where we left off last season, and instead exploring the family that is the Murphys. Each member of the family is genuinely interesting. Teenagers are usually a narrative burden, but when you write them as real, mature characters, so many more layers can be explored, and that’s what was done here with Michael and Evie. There are still tons of questions, but the intrigue is a great alternative to getting concrete answers. I’m equally nervous and wildly excited to see how the Murphys match up with the Garveys, specifically Kevin v. John. Lastly, this premiere wasn’t without its bizarre-to-us/normal-to-them moments. Seriously, there was that bird in the woods that Erika dug up, Evie and her friends running naked through the woods and even that guy butchering a goat in a crowded diner. Whether these moments are metaphors or just a normal way of life for these people post departure, I’m sure they will resurface in some way or another.

Were you a fan of that bizarre opening? Where’s Evie? Tweet me @NerdDotMe. Also, be sure to follow us @YouNerded.